It is with great sadness that the family of Michael “Mike” James Redmond announce his passing on Wednesday, September 9th, 2020 in London, Ontario. Surrounded by his daughters, he passed away peacefully. Michael is predeceased by his wife Lynn Redmond, parents Michael Joseph and Mary-Ellen Redmond and brother-in-law, Bernard Galarneau. He is survived by his daughters Melissa Fortier (Tim Stoakley) of Delaware and Vanessa Kennedy (Cory Kennedy) of London, sister-in-law, Lorraine Galarneau of Ottawa and nieces and nephews Lisa, Matthew and Susan Bolick (Ted Bolick) of the Ottawa area. Michael will be deeply missed by his grandchildren Hannah and Elijah Fortier of Delaware (Lauryn Stoakley) and his many friends.

Michael was born on October 2nd, 1947 in Outremont, Quebec to Irish immigrants descending from Tipperary and Londonderry Ireland. At the age of 16, Michael began working in the printing industry at Canada Printing and Lithographing, part of the Montreal Gazette. On August 5th, 1972 Michael married the love of his life and within 10 years they had welcomed two daughters and relocated to Whitby, Ontario. Michael continued his printing career at Bomac Printing in Toronto from 1984 to 1998, when he was forced to retire due to digital advancements in the industry. After the passing of his beloved Lynn, Michael relocated to London, Ontario along with his daughters. Even though work and family kept him busy, Michael made time for his passions: curling, tennis, golf and travel. He was a longtime President of the Whitby Tennis Club, ran the Youth program and played in various leagues. As a member of the Oshawa Curling Club he played “Skip” and started up the ‘Little Rocks’ program. The perfect downtime for Michael included a cold beer and watching Notre Dame/ Montreal Canadiens, Wimbledon, Scott’s Tournament of Hearts/ Brier or a good boxing fight. His daughters lovingly remember him as being active in their extracurricular activities often in the role of “Coach Redmond”. Michael took great pride in his role of Father and Husband and was known as a friend that would give the shirt off his back to anyone in need. He had a deep love of music especially old country and rock ‘n’ roll, learning magic tricks and binge-watching TV series that he discovered only after the series ended (something he was teased about).

The memorial visitation for Michael Redmond will be held at Northview Funeral Chapel, Friday, September 18th, 2020 between 2:00 p.m. – 5:00 p.m. Registration is required to attend the visitation. To register, please click on the RSVP link on the left.

Michael had a deep respect for the Canadian military. In lieu of flowers he has asked for donations to be made to Wounded Warriors Canada at https://woundedwarriors.ca/donate/

Death leaves a heartache no one else can heal. Love leaves a memory no one else can steal. May the memories of your dad bring you some comfort during these times of grief and sorrow. Sending our thoughts and virtual hugs to all of you. Nicole and Tony Matias and family.

I'm sorry for your loss. Sending much Love and comfort to Mr. Redmonds loved ones. R.I.P

Mr. Redmond, Your dry sense of humour was great at always keeping me on my toes! Thank you for the smiles and love you gave me. Love, Dianne

Dear Melissa, Vanessa & family, We are so sorry to learn about your father’s death. We know what a great loss it must be for all of you. He was so proud of all of you and appreciated all the love you gave him since your mom’s death. We hope that memories of good times with him in the past will help ease the pain you must be felling now. We will keep him and all of you in our prayers. With much love,Bob & Carol Hartigan

Dear Melissa and Vanessa I was so very sorry to hear about your dad from your Aunt Lorraine. To your families, I offer my deep condolences. May he rest in peace. Sincerely Lois Bailie 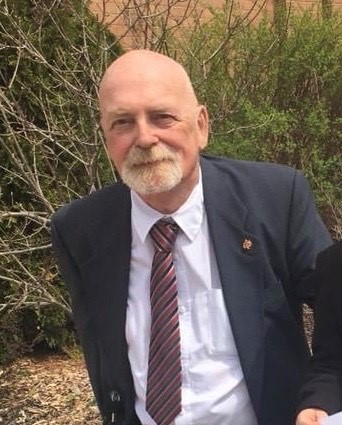