It is with heavy hearts that we announce the passing of our parents Ralph and Gen.

Devoted parents of Gail, Greg (Janet McCallum), Leslie Babb (Perry) and Lori.  Grandparents of Adam Babb, Matthew Babb, Jason Babb, Marc Heller, Jaclyn Robertson, Drew Robertson and Kyra Welch.  Great-grandparents of Reese Babb and Paige Babb.  Gen is survived by her sister Helen and was predeceased by her brother Henry.  Ralph was predeceased by his brothers George and Albert and his sister Florence.  They will be greatly missed by many nieces, nephews, friends, and extended family.  Special thanks go out to Sharon Heller, Joanne Heller Geddes, Nancy Warden and Rick Robertson who were available to help on a moment’s notice.

Born in Kitchener, Ontario, Gen attended flight attendant training school in Minneapolis in the early ’50s.  Ralph was born in Waterloo, Ontario where he was very active playing hockey, football, and baseball.  They were married in Kitchener in 1954, and 11 months later, Gail was born.  They then moved to Galt in 1957 where Greg was born.  In 1960, they moved back to Waterloo and Leslie was born, and in 1963 the family moved to Stratford, where Lori was born in 1965.  In 1966, they moved to a new home in Northridge (London), where despite continuous lobbying from Greg, a brother was not to be had.  Ralph was active with the Boy Scouts and coaching Hockey and Baseball.  After retirement he was a member at Forest City Golf Club where he recorded two holes-in-one.

In the ’70s, Gen worked at Western University’s Faculty of Pharmacology and typed PhD thesis’.  Gen was renowned for her cooking and pickling.  For her 75th Birthday, Ralph and Lori put together a beautiful cookbook with all of her recipes in it.  Gen and Ralph bought a small gift shop in the early ’70s and named it the Flamboyant Boutique.  In 1974, they moved the location to Oxbury Mall, added lines of fine china and renamed the business the China Cabinet.  A few years later they added a second location on Richmond Street and Ralph joined Gen in operating the business full time.  Gen and Ralph loved entertaining in the summer around the pool and they were famous for both Heller and Mroz family reunions.  After retirement, they moved to a townhouse Condo in North London where they met many new friends.  They enjoyed travelling the world, playing bridge and the Friday afternoon cocktail parties with the Condo group.

A special thank you to the entire staff and all of the personal support workers at the Dorchester Terrace Retirement Residence who cared for Gen and Ralph over the past 2 and a half years.

For those unable to attend, the family welcomes you to participate in the service via livestream here: Livestream for the Memorial Service of Ralph and Gen Heller

In lieu of flowers, those wishing to make a donation in memory of Ralph and Gen are asked to consider the Heart And Stroke Foundation of Canada, the London Regional Cancer Program, or the Alzheimer Society Southwest Partners to go towards the Social Work Programming.  Also, Gen’s Cookbook can be purchased for $25 with all proceeds going to Ukrainian Relief by contacting greg@thechefupstairs.com. 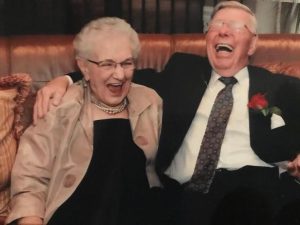 Leave a tribute for Ralph and Gen Heller

We met your parents at Dorchester Terrace and enjoyed their company. We will miss them very much. Sincere condolences. Jim and Dorothy Theobald.

My sincere condolences to your entire family at this difficult time.

Hello and sincere sympathy to the entire Family - - what a wonderful tribute today for absolutely amazing people. All of the memories shared brought such smile and tears all at the same time as it was exactly who they were - generous, sincere and loving devoted parents/grandparents. They really were the most selfless people I knew and I will forever be richer for having known them. Our family will also forever be grateful for their kindness expressed during our most difficult times. Forever in our hearts - I loved them both very much. Carol

A donation has been made in Ralph and Gwen’s honor to the Heart and Stroke Foundation of Canada. Sending my sincere condolences.

My most sincere condolences. I have made a donation to the Heart and Stoke Foundation in Ralph and Gen’s honor.

A donation has been made to Alzheimer Society Southwest Partners.

A donation has been made to Heart and Stroke Foundation of Canada. Message from the donator: Our sincerest condolences to your families. Aunt Gen and Uncle Ralph were so loved and cherished by our Moisan family. Our hearts and prayers are with you at this difficult time. Love, Gweneth, David, Ryan and family, Jeff and family and Kathryn and family

Our heartfelt condolences to the loss of Ralph and Gen. Joe and I bowled with them years ago with the Sacred Heart Church from Delaware. When we moved into London, we would see them weekly at St. Michael's Church. God Bless! Joe and Tiny Overmars

A donation has been made to Heart and Stroke Foundation of Canada. Message from the donator: Dear Heller Family - I was very pleased to provide a donation in honour of your parents, Gen & Ralph yesterday. Although, I only met your folks on limited occasions with Gail, I was always made to feel very welcome, admired their wit in always creating an enjoyable visit. I love the picture you shared of your folk's passing announcement, clearly demonstrating a wonderful time. May fond memories of similar family occasions make you smile. Take care and keep well. With sincere condolences, Sally

A donation has been made to Alzheimer's Society Southwest Partners.

Our condolences and love are there for your family with the loss of your parents and grandparents. We have so many fond memories of them with all your friends. I particularly remember Ralph being so much part of Greg's life with his circle of friends at Lucas SS and UWO that to this day Greg bears the name "Ralph"...a real tribute and honor to a great man and wonderful lady Gen. We are thinking of your family during this time of sorrow. The Dunn Family

A donation has been made to Alzheimer Society Southwest Partners. Message from the donator: In Memory of Gen & Ralph

Gail, Greg, Leslie, Lori and families, our deepest condolences on the passing of your parents. I have known your family since I was 5 years old and have many fond memories to reflect upon. Gen & Ralph will greatly be missed. Love Bev & Roy.

To Helen Bogdon, and Gail, Gregory, Leslie and Lori and families. I was sadden to hear of the passing of Gen and Ralph. My prayers and condolences in this time of sorrow. Gen was my second cousin and her mother was my god-mother. A donation will be made to the Alzheimer Society in remembrance of Gen and Ralph.

A donation has been made to Alzheimer Society Southwest Partners. Message from the donator: Deepest sympathy from Ann and Family.

We are so sorry for your loss! You all are in our thoughts and prayers! Ralph and Gen will be greatly missed. We have such great memories of them! Love Nancy and Don

Great people, great parent, great family, what the world needs more of. They will be sadly missed but lots of memories to look back on. RIP🙏

Very sorry to hear of your parents passing. I worked with Ralph many many years ago at Western.

A donation has been made to Alzheimers. Message from the donator: Deepest sympathy to the family of Ralph and Genn. I met them when I joined their bowling team. Great people and Ralph and I had lots of laughs always joking around . He had a great sense of humor. Genn had a great smile and a hearty laugh. You could see they were soul mates

Our deepest condolences to you Jason, Leslie and family during this difficult time! From the stories I’ve heard about Gen and Ralph as we grew up together going to school, they were such wonderful people and always loved hearing you sing Jason :) Let all the wonderful memories comfort you during this time xoxo Amanda, Daniel and Olivia

Sending our very warmest thoughts to your entire family. xoxo

Dear Gail, Greg, Leslie, Lori and families, I am so very sorry to hear about your parents. I have so many wonderful memories of times spent together - at the cottage, at your home, at our home. You have all been an extended part of our family, forever. May your wonderful memories help you cope with the sadness you are feeling now.

Services for Ralph and Gen Heller

Heart and Stroke Foundation of Canada